As explained elsewhere, our world is made from four levels of energy frequencies, or octaves. The material or physical world is the lowest in vibration, meaning it is highly influenced by what is happening in the three higher levels.

The massive evil we have seen throughout history cannot be explained by looking for causes only in the material world. It can be explained only when we realize that there are evil beings in the emotional, mental and identity octaves and that these have an agenda that has never before been exposed in the physical octave.

We also need to understand that these beings can control human beings and cause them to commit atrocities that they could not even think of on their own. Thus, people who are seen as evil, such as Hitler, do not act only with their own powers or based on their own agenda.

When seeking to explain evil, it is important to keep in mind that there are several types of evil beings and they have different agendas or modus operandi. This means that what explains some types of evil will not necessarily explain other types.

As explained elsewhere, the world we live in is created and upheld by a stream of energy from the ascended realm. This energy is sent by the ascended masters, but it is not sent indiscriminately.

A certain amount of energy is sent in order to uphold the material world, including planet earth in its current form. Earth can therefore be seen as a complex energy system. Energy from the ascended realm streams into and through the four octaves: identity, mental, emotional and physical. 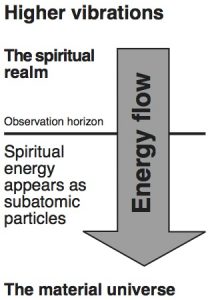 Most of the energy that streams into the energy system of earth does not stream directly from the ascended masters into, for example, the physical octave. It streams through the minds (four energy bodies) of human beings. Therefore, the stream of energy and the amount of energy sent by the ascended masters is directly tied to how we use our free will.

The principle is simple and tied to the law that is described in most religious and spiritual philosophies, namely to treat others as you want them to treat you. If you use your allotted energy for selfish purposes or even to harm or control other people, the amount and intensity of energy will be reduced so you cannot do as much damage to others and yourself.

If you use your energy unselfishly to raise conditions for everyone, you will receive more energy. There is no limit to how much creative energy a human being can receive when it is entirely selfless.

If a human being over several lifetimes has become increasingly selfish, the energy stream from the ascended realm will be reduced to a point where there is only enough energy coming to keep the physical body alive and keep the person conscious.

The energy equation is simple: When you become selfish, you are cut off from energy directly from the ascended realm. You can therefore exercise power only by stealing energy from human beings. This holds true for evil people in embodiment and for disembodies evil beings in the three higher octaves.

By understanding this equation, you now see an explanation for many actions and philosophies. Most people are still receiving energy from the ascended realm. The beings who have been cut off from this flow have come up with numerous schemes in order to steal energy from those who are receiving it from above.

The energy we receive from the ascended realm always vibrates above a certain level of vibration. We can say that the energy has a loving vibration. Evil beings cannot absorb love energy directly. Therefore, their schemes are aimed at getting people to pervert love-based energy by lowering its vibration into the fear-based spectrum. 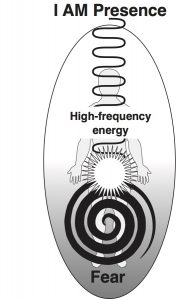 Evil beings have generated numerous schemes that may seem to have some benign purpose, but their real goal is to get people to pervert love-based energy and express it as fear, anger and other fear-based emotions.

Many examples of such schemes will be exposed on this website. Let us mention only a few:

One simply cannot explain the evil seen throughout history, unless one understands that evil beings always have to steal energy from human beings. This is the overall modus operandi of all evil forces, even though some of them also have other agendas. Based on this realization, we can now take a look at the evil beings in the three higher octaves.

Evil beings in the emotional octave

The emotional octave is right above the physical octave in vibration. We all know that people often act based on their emotions. Thus, the evil beings in the emotional octave seek to stir up or control people’s emotions in order to steal their energy. They often do this by getting people into an agitated emotional state so they commit actions that create conflict or suffering for others.

This often creates a spiral of conflict or suffering that can become almost self-sustaining. One can see numerous such spirals around the world, between both individuals or groups of people. Many people have their entire lives having their attention swallowed up by being engaged in such spirals.

It is important to realize that the outer reason for such spirals means nothing to the dark forces. They simply use whatever appeals to people in order to get them to commit actions that allow the dark forces to steal people’s energy.

There are three types of evil beings in the emotional octave:

It is important to make this distinction: t

These beings are created by humanity collectively, but although we have the ability to create such spirits, we do not have a high enough consciousness to endow them with self-awareness and free will. Only the ascended masters can do this.

This means that such beings cannot ever be redeemed or transformed. For the earth and humanity to return to a higher state, these beings need to be removed from the planet. The ascended masters can do this, but only when they are authorized by us to do so.

We can do this by rising above the consciousness that caused us to create such beings. This will cause us to stop feeding our energy to the evil beings. We can also make the calls for the ascended masters to bind or consume these dark beings. We can then invoke enough high-frequency energy from the ascended masters that it can transform the fear-based energies accumulated in a given spirit. This will cause them to be removed so they can no longer influence humanity.

Evil beings in the mental octave

Many of the evil beings in the mental octave are fallen beings who have an agenda that can seem sophisticated to human beings. These fallen beings have often developed their intellects beyond that of most humans. Thus, they are good at arguing for a certain cause, and this can often convince human beings.

Some fallen beings in the mental octave have a self-centered agenda of setting themselves up to have as many people as possible follow them blindly. Some of these fallen beings have taken over the minds of human beings and inspired them to bring forth various ideologies, philosophies and even religions.

They often define these ideas in such a way that they have an opposite. This sets up a dualistic battle between two thought systems where each of them claims to have the highest truth. It now becomes necessary, for the sake of some greater good, to eradicate the opposing polarity, and this feeds the fallen beings. A classical example of this kind of dualistic conflict is capitalism versus communism.

There are also collective spirits in the identity octave. These have been created by us collectively by people focusing their attention of a particular thought system. An obvious example is that all larger religions have created a collective spirit that often seeks to prevent people from leaving their religion. These spirits can also increase the conflict (set up by the fallen beings) between various religions by getting people to feel they have to convert others or some calamity will happen. The same holds true for political ideologies, even the thought system of materialism.

Evil beings in the identity octave

Fallen beings in the identity octave are the most sophisticated, meaning they have a large capacity for deceiving human beings. They are especially good at distorting our sense of identity, and one of their agendas is to make us forget who we really are, making us limit our abilities to be open doors for our higher beings and the ascended masters. They want us to feel that we are powerless to oppose the fallen beings and their reign on earth.

An obvious example of this is the Christian doctrine of original sin, which says that god created us as sinners and thus, anything we do is a sin. The consequence is that we do not have the ability to change most of the limiting conditions found on earth. In reality, we are co-creators, and we have the ability to co-create a new state of the earth where all of the conditions created by the fallen beings are transcended.

Some fallen beings in the identity octave have as their agenda to create a world that is separated from the rest of our sphere and that can exist on its own. They want to create such a sophisticated civilization that they think the Creator will have to accept them and give them eternal life. They want to have the powers of the ascended masters without ascending (overcoming separation and ego).

Some fallen beings in the identity octave have as their agenda to prove the Creator wrong. They especially want to prove that giving human beings free will was a mistake. Thus, they seek to make us misuse our free will for destructive purposes so we will destroy anything constructive on earth. They suffer under the illusion that if they can cause us to destroy the planet or prevent us from ascending, the Creator must admit that it was wrong to give us free will. They also think this will force the Creator to revoke our free will and give the fallen beings unlimited power over us.

There are also many collective spirits in the identity octave, especially those that make us feel limited or make us feel superior to others because we belong to the only true thought system.

NEXT PAGE: Why fallen beings cannot be reasoned with